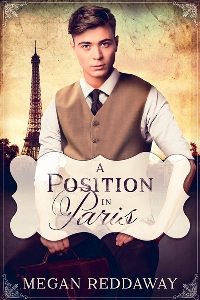 The gorgeous cover, designed by Natasha Snow, was revealed exclusively on The Novel Approach blog yesterday, with a giveaway that runs until midnight July 29th.

It’s not out for review yet, but one of the editors sent me a lovely comment when they first read it:

This story was a delight that warmed my heart. I was enraptured from the beginning. I just finished it and I want to re-read it again.

World War One is over, and wounded hero James Clarynton is struggling to face life without one leg, one eye, and the devilish good looks he had before the conflict. Now he must pay for affection, and it leaves him bitter. He’s filling the time by writing a book—but it’s the young man who comes to type it who really intrigues him.

Edmund Vaughan can’t turn down the chance to be secretary to the wealthy James Clarynton. He’s been out of work since the armistice, and his mother and brother depend on him. But he has secrets to hide, and the last thing he wants is an employer who keeps asking questions.

As they work together, their respect for each other grows, along with something deeper. But tragedy threatens, and shadows from the past confront them at every turn. They must open their hearts and trust each other if they are to break down the barriers that separate them.