I’m doing a blog tour as part of the release blitz for Out, Proud, and Prejudiced, and today I’m at Love Bytes Reviews answering the question: Do you put people you know into a book?

It’s something people always wonder .. especially when they have a novelist for a friend! Do writers take people from their real lives and put them into their books? Usually I think it’s a no. I don’t think it happens like that, because that’s not how the imagination works.

Of course there are autobiographical novels where writers take all the events and people from their family, change the names and put things into a better order for a story, and publish it. But most of the time, the point of writing stories is to set down all of the unreal people and happenings that our imaginations constantly come up with.

When I was writing Out, Proud, and Prejudiced, I already had a set of characters to model mine on — the characters that Jane Austen had used in the original Pride and Prejudice. I’ve changed things, but I’ve changed them while trying to reflect everything that was already there. So I wanted someone in the place of Elizabeth, someone in the place of Darcy, etc. It’s a male/male retelling, so genders often change, and it’s set in the modern day, so society is different and so is the physical appearance of England. But the story follows the same arc, and the characters are equivalent, although not the same.

In this case, I did base one character on somebody I knew. To see who it was, you’ll need to read the rest of the post at Love Bytes. 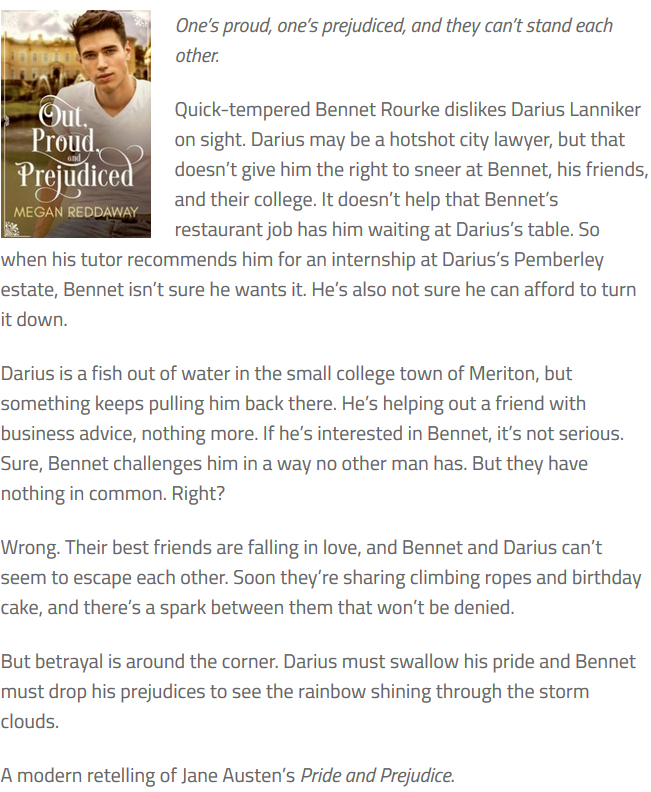 See Love Bytes review of Out, Proud, and Prejudiced