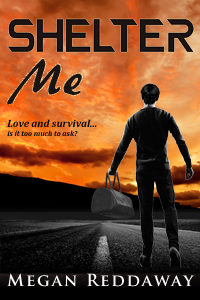 Love and survival — is it too much to ask?

Leo Park is an empath on the run. He’s escaped the secret research facility where he’s been held since he was six years old, but how can he survive without being captured? He has no money, all his ideas come from old movies, and he’s carrying his baby brother, smuggled out in a carton.

Cole Millard lives by his own rules in the Oregon woods, refusing to fear the world war that’s coming closer every day. Now his freedom is threatened by a naive 19-year-old with a baby in tow and a spooky way of knowing what Cole is feeling. But Leo is vulnerable and desperate. What’s a guy to do?

Shelter Me is a fast-paced dystopian gay romance novel set in a not-too-distant future, with a hot backwoodsman, a desperate fugitive, a six-month baby, and the world on the brink of an apocalyptic war.